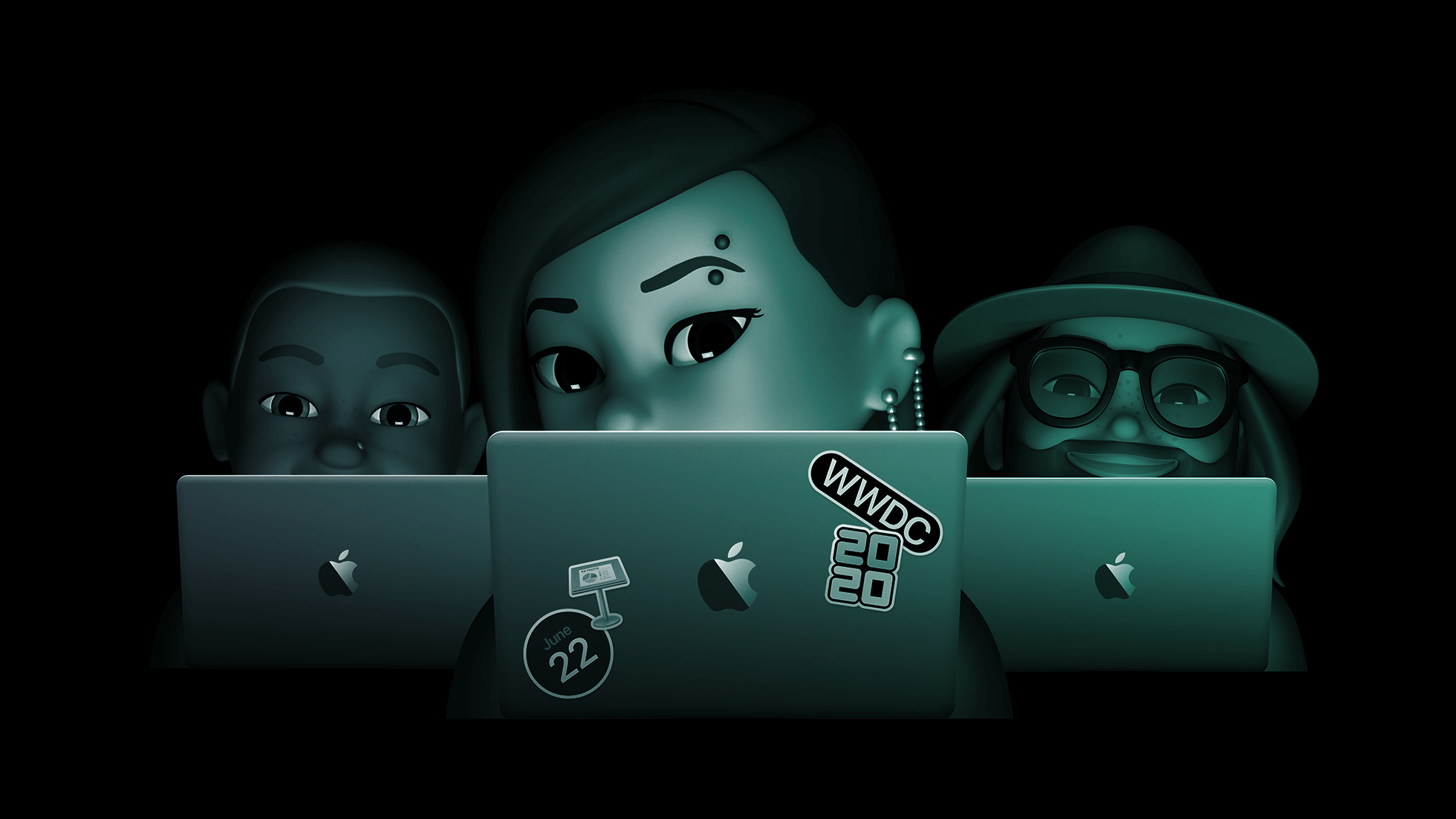 Following the events of 2020, Apple decided to host their conference online this year, and did a great job of doing so.

As the resident Apple fan in the Hark office, I’ve detailed my highlights and thoughts below, but there is a lot more from the conference as a whole!

In previous years, 5000 software engineers descended upon California to attend WWDC. Here watched the keynote and many sessions throughout the week detailing the specifics of new features and APIs for developers to build their applications on top of.

This year, the keynote and sessions were held entirely online. At 6pm every day, sessions were released for developers to watch. Developers were also able to apply for one-on-one meetings with Apple engineers to work out any bugs or talk about the new tools available.

The sessions are usually live presentations made by Apple engineers. However, this year they were pre-recorded and extremely well-produced videos.

Without the scheduling requirements of hosting a physical conference, Apple were able to make refined and concise sessions. I’ve been watching the sessions and I personally prefer this format to the on-stage presentations.

In short, I’d love for them to continue with the format that they made this year!

The biggest, and rumoured, news this year was the transition towards Arm Macs, although Apple have called them Apple silicon Macs. Transitioning the Mac to Arm will unlock a lot of potential progression for the Mac. This includes better battery performance for MacBooks and hopefully the performance progressions will match that of the iPhone, whose performance has more than doubled every year.

For reference, the iPhone’s CPU has been faster than the average Intel CPU on single core performance for quite a while!

As the iPad also runs an Arm CPU, Macs running Apple silicon will automatically have access to the iPad app library, with Apple pushing to make the Catalyst API great for making iPad apps feel at home on the Mac.

The corners are more rounded than before, which paired with the tweet below leads me to think: are rounded corner displays coming to the Mac? What about a display with a notch like the iPhone?

Big Sur brings Control Centre from iOS to the Mac allowing more consistency across Apple’s user interfaces. It’s cool, but more popular items can be moved back to the menu bar to reduce that extra click for actions you perform more often than others.

Messages has been brought up to scratch with the feature set available on iOS, including the powerful search features that came With iOS 13. Sending a message with lasers no longer just says “sent with lasers”, it performs the animation that users on iOS see.

You can now pin your favourite chats, and improvements to group chats mean you can now directly mention someone, perform an inline reply and more.

As always, WWDC brings great additions for iOS. I’ve picked some of those I’m happy about, even if they’re small:

For a long time the home screen on the iPhone and the iPad has been the famous grid of icons. Though this screen has stood the test of time, it was about time Apple added something to it.

In iOS 14, developers will be able to provide a set of widgets that users can place on their home screens to be able to instantly view information from their apps. Whether they are Calendar applications, productivity tools or any other apps, developers are able to build custom widgets that provide helpful information to their users that look great. I’m excited to see what OmniFocus will let me see on my homescreen!

As a fun tidbit, the new WidgetKit API contains references to a (private) “_clockHandRotationEffect” method, which to me, suggests the potential for using the same WidgetKit API for custom watch faces on the Apple Watch, although this is a long shot.

Another long-awaited feature on iOS is being able to set a default web browser or email client on your device. For a long time, apps have made third party ways of selecting what web browser you use, and now it’s a integral feature of iOS.

As someone who uses a third party email client, and previously used a third party web browser, this feature will make a lot of different when clicking on an email address in another app, or from the web.

Though this feature wasn’t spoken about during the keynote, it was present on a slide. It is interesting to think about, given the recent antitrust issues surrounding Apple and the App Store.

On top of the features from the iOS 14 release, the iPad got its own set of changes that make great quality of life improvement features. I was hoping they’d release better external display support for the iPad, allowing it to function as a secondary display, but alas.

I love using the Apple Pencil, it makes a great change from using a trackpad and keyboard or using my finger to interact with the device. I even use the Apple Pencil to edit podcasts using Ferrite. This helps with my RSI as the gestures are more natural than handling a mouse.

In iPadOS 14, you can now use the Apple Pencil to handwrite text in to any text field and it will convert it to digital text, ready for submitting a form or making notes. The recognition is great, and a big upgrade from the Newton days. It even works with fairly illegible handwriting too.

As an upgrade to the search features previously present in iOS, the iPad gets a new universal search tool which mimics Spotlight on the Mac. It allows you to search deep content within your contacts, apps, and the web. Again, another fantastic quality of life improvement when using the iPad to quickly navigate and get work done.

The Apple Watch has also been improved, including the long-awaited native sleep tracking. Initial feedback suggests using other third-party sleep tracking applications may still be useful for Apple Watch users. For those who are just getting started with the Apple Watch, it’s a nice entry point.

In previous watchOS releases, only one complication per-app could be placed on a watch face at a time. In watchOS 7, you can have multiple complications from the same app on one watch face!

I’m looking forward to further advancements for the Apple Watch in this September’s (typically iPhone) event but watchOS 7 keeps us going until then!

In iOS 13 Apple launched SF Symbols, a huge set of icons developers can use in their apps to illustrate button actions and whatnot. Sadly, those icons weren’t available on the Mac, until macOS Big Sur!

SF Symbols 2 brings over 750 more icons for developers to use and over 150 multicoloured symbols which are adorable. More importantly, look at the icon for PC:

Since Apple bought Workflow in 2017, the Workflow community have been happy with the improvements Apple have made to Shortcuts every year. This year is no exception.

At last! Shortcuts can be organised in to folders, which is great when you have a lot of them like me! Furthermore, the Shortcuts editor now allows you to copy and paste actions across Shortcuts which helps when you’re creating variations of the same shortcut.

More automation triggers have been added including Email, Message, Charger and more, with some of the existing triggers no longer requiring user confirmation. This really improves the experience of using automation tools!

Running Shortcuts on the Apple Watch is back (finally) and multiple Shortcuts can be placed on a watch face allowing users to quickly run common shortcuts – great for home automation actions!

Alongside all of the fantastic new features, Apple have made improvements to a whole bunch of their APIs and frameworks, which in turn, has improved the experience of applications on their platforms.

SwiftUI continues to gain new features and functionality. You can now build an app entirely in SwiftUI without the use of AppDelegates, but defining all of your user interface in Swift UI, including Mac menu bar items!

Catalyst, Apple’s API for bringing iPad apps to the Mac, gets more improvements including being able to use native macOS controls instead of iOS controls, making Catalyst apps feel more at home on the Mac. Apple are confident in the direction they’re going with Catalyst!

Apple delivered a fantastic online-first conference this year, which left developers happy and announced great features for the next generation of apps built on Apple platforms. In this article, I’ve detailed just some of the new features and tools Apple have announced, but there is still so much more to explore!

Over the coming months, developers at Apple and outside of Apple will work hard to support and refine their software ready for the release of iOS 14, macOS Big Sur, watchOS 7, and more. I’m looking forward to playing with more of the betas, and getting my hands on the new features when they’re released to the public!